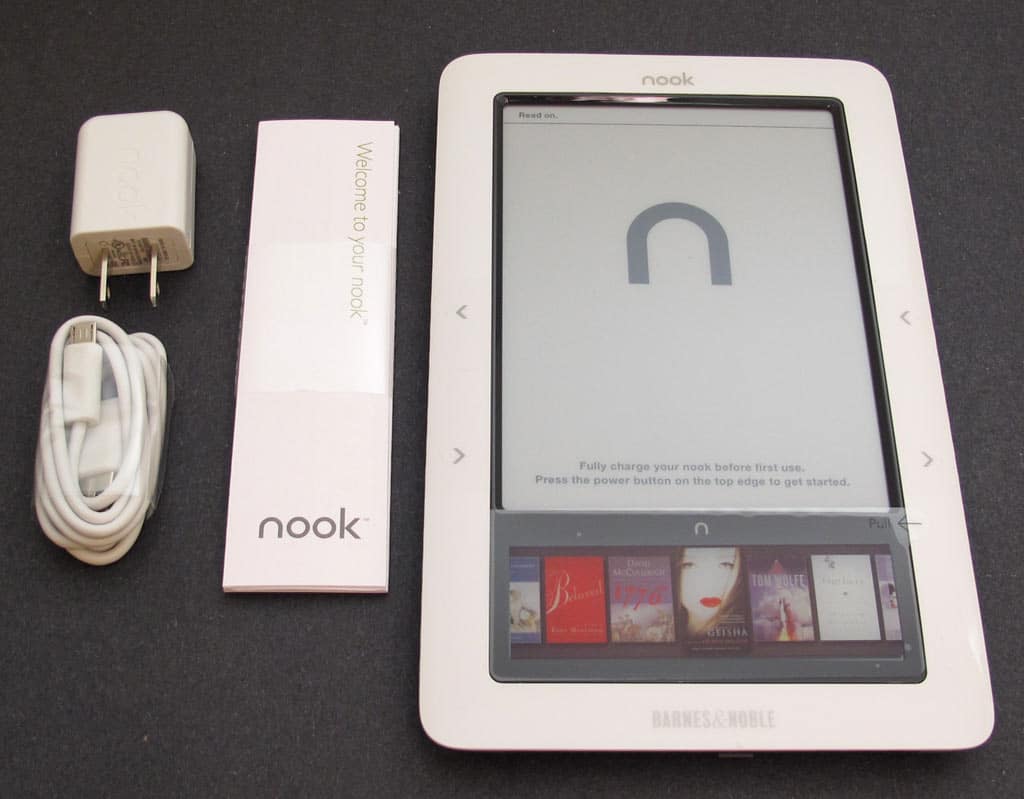 Barnes and Noble has confirmed to Good e-Reader that they are no longer supporting the 1st generation Nook. On June 29th customers will be unable to purchase new content, register with a BN.com account, or sign in using a NOOK account. Users will be unable to access their ebook library and all purchases will no longer be accessible. Barnes and Noble has promised that all of their digital content is not disappearing into the ether, but can still be accessed on other Nook e-readers, Nook tablets or any of the B&N apps for Android or iOS.

The first generation Barnes and Noble Nook 3G and WIFI model was released November 2009 and retailed for $259. The company broke the mold of having a single screen and decided to use two. The main reading panel was six inches and had a resolution of 800×600 and the bottom one was a 3.5 inch color touchscreen with 480 x 144 pixels.

When Barnes and Noble released this e-reader they borrowed a page out of Amazons playbook by offering free 3G internet access via AT&T. Users did not have to pay a premium cost or a monthly fee to buy books. It was also compatible with most WIFI networks.

The Nook featured a very innovative design and people at the time accused the bookseller of copying the Spring Design Alex. Spring Design thought so as well and initiated the lawsuit in 2009. They claimed they had met with Barnes and Noble to discuss jointly creating an e-reader. The meeting went nowhere, but months later Barnes and Noble released the Nook 3G. Spring design then took them to court accusing B&N of copying their design. While the Nook went on to be a huge success, the Alex e-Reader ended up not selling very well and was quickly discontinued.  B&N ended up reaching an agreement to pay Spring Design a licensing free.

One of the big reasons why Barnes and Noble is discontinuing support for the 1st generation Nook is because they are no longer developing software and firmware updates in-house. They have outsourced it to a company called Bahwan CyberTek (BCT), a software services and product company headquartered in India.

There could be a couple of reasons why the 1st generation Nook getting the axe. I believe that it primarily due to the diminished userbase.  The costs of cloud storage, firmware development and maintaining legacy code is outweighing the revenue that B&N generates from new ebook purchases on really old hardware. I also think that B&N is still paying Spring Design licensing fees and if they totally discontinue the platform they will no longer have to pay them.

Barnes and Noble has told Good e-Reader that they are offering people with 1st generation Nook a 50% discount on a Nook Tablet or the Nook Glowlight 3. The Nook Tablet can be attained for a paltry $25 and the NooK Glowlight 3 is available for $59.99.  Nook users will be emailed a promotional voucher code that be redeemed online or in stores. If you do not get the email, you can call them at 877-831-2393 Monday-Friday 8AM–11PM EST and Saturday-Sunday 9AM–11PM EST. Please be prepared to provide your NOOK 1st Edition serial number. If you need assistance locating your serial number, click here for instructions.

Not everyone is still using the same email address they had in 2009 and it is very likely that when July rolls around thousands of users will be unable to access their content. This entire situation could be a serious public relations nightmare for the nation’s largest bookseller. The Nook is a really toxic brand right now and management has publicly stated that they are no longer in the technology business and are more concerned about cutting costs, than providing quality service.