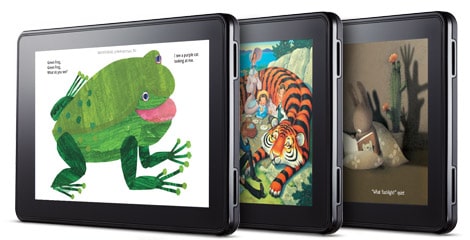 Amazon’s ploy of selling the Kindle Fire cheap or even at a loss and make up for it by selling content seems to be working fine. For as per a survey conducted by an investment banking firm RBC, Amazon is raking in more than $100 for every Kindle Fire sold, which is several times more than the $3-$17 that the online retail giant is loosing with each Kindle Fire. Amazon never really has revealed how much the Kindle Fire costs to manufacture or how much they are profiting by selling e-books, apps, or prime membership.

“Kindle Fire unit economics are likely to be more favorable than consensus expectations, based primarily on frequency of digital goods purchases. Our assumption is that Amazon could sell 3-4 million Kindle Fire units in Q4, and that those units are accretive to company-average operating margin within the first six months of ownership. Our analysis assigns a cumulative lifetime operating income per unit of $136, with a cumulative operating margin of over 20 percent,” said RBC Capital analyst Ross Sandler in a research note to clients.

The survey further revealed e-books have added to the Amazon coffers the most, with almost 80 percent of Kindle Fire owners having purchased e-books from the Amazon store. Also, almost 58 percent of those have bought 3 e-books within the first 2 months of owning the Kindle Fire, though the general trend is to buy three e-books per quarter.

Apps is the next biggest profit earner for Amazon, with almost two-thirds of Kindle Fire owners having purchased at least one app, while 41 percent of those polled bought a minimum of three apps.

Amazon has struck to a simple marketing strategy with the Kindle Fire—flood the market first with enough of the 7 inch tablets using a cheap upfront cost as a bait to lure in buyers. Once that is done, let the tablet owners source their content from Amazon, which in turn will add to the company’s bottom line. A nice and simple plan, and it seems to be working.