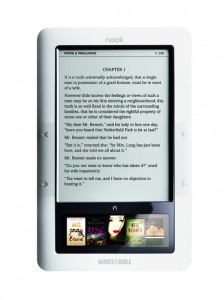 The latest device to join the explosively-growing e-book reader crowd is the $260 Barnes & Noble “Nook.” Nook debuted Tuesday and will be available at the end of November, Barnes & Noble says.E-readers are one of the fastest-growing consumer electronics product categories, although the overall category is still small. About 3 million e-readers will be be sold in … END_OF_DOCUMENT_TOKEN_TO_BE_REPLACED

Even before the Kindle 2 launched, there was talk of an even newer, larger digital reader from Amazon that would be geared more toward reading textbooks and periodicals. We all assumed it would be bigger, but it was unclear exactly what form it would take. Well, now that it's finally arrived, what is a little surprising is how much the Kindle DX--bigger face aside--is a dead … END_OF_DOCUMENT_TOKEN_TO_BE_REPLACED 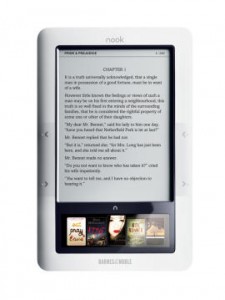 While information on Barnes & Noble's new e-book reader, the Nook, has been trickling out for several days, the company unveiled the new $259 device on its Web site Tuesday a few hours before the official launch event in New York.As previously reported, the Nook, billed as the first Android-powered e-book reader, features not only a 6-inch E-ink screen but a color touch … END_OF_DOCUMENT_TOKEN_TO_BE_REPLACED