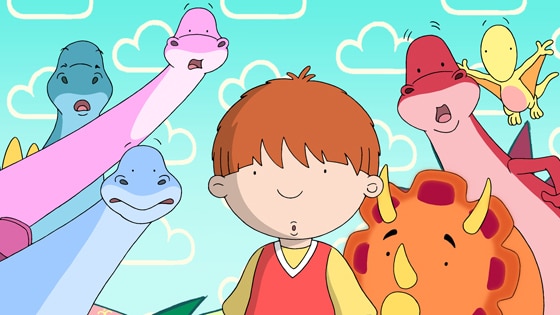 Canadian based CCI entertainment is getting the ebook treatment with its popular series Harry and His Bucket Full of Dinosaurs.   The crux of the series is a five year old boy with a bucket full of toy dinosaurs. He jumps inside the box to get transported to different worlds and per-school fun ensues.

The company is launching a series of apps for the iOS and Android platform and will include some interactive elements. The first book to be developed is a tale called “Uh Uh.” CCI is developing these new enhanced books in conjunction with PadWorx studios.

“We are thrilled to be partnering with PadWorx to create this line of interactive educational eBooks,” said Charles Falzon, the co-chairman of CCI Entertainment. “CCI develops each property with a multi-platform approach and an eBook program is a seamless digital extension for the Harry and His Bucket Full of Dinosaurs brand.”

Jeffrey Alan Schechter, the CEO and creative director at PadWorx Studios, added, “Harry and His Bucket Full of Dinosaurs is one of the most popular, charming preschool brands out in the market.”

The Dinosaur series proves to be very  popular with kids and its literary offerings comprise of over 17 books. Its television series is viewed in major markets such as Canada, UK, USA, Australia and 13 other countries. Many people are drawn to the online web portal where you can play online games and view the television schedule.