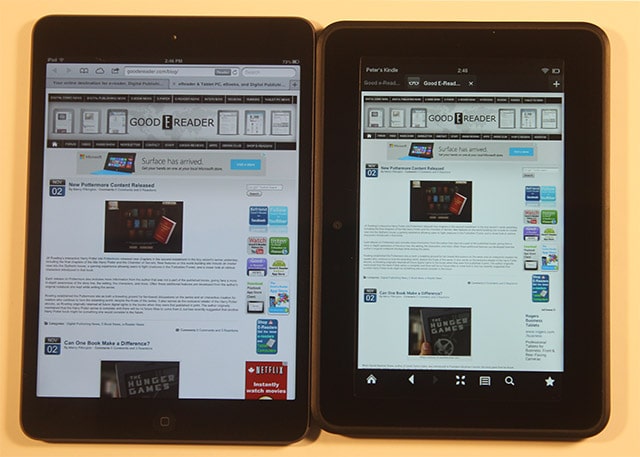 Welcome to another beloved installment of the Good e-Reader Video Comparison Series! Today we check out two tablets that are heavily competing against each other. The Apple iPad Mini and the Kindle Fire HD 7 are poised to vie for your attention on the road leading to the holiday season.

The iPad Mini features a 7.9 inch screen, while the Kindle Fire HD has the traditional 7 inch. These two devices are fairly unique. Amazon continues to refine its skinned Android approach, streamlining its distinct look and functionality. The Kindle also has 4 stereo speakers with Dolby Surround Sound! If you are into audiobooks, music, or video, you will get tremendous sound quality. Not to be outdone, the iPad Mini has incorporated stereo speakers as well, which project sounds better than all Apple’s prior models.

In this video comparison, we show you how ebooks, magazines, comic books, video, and audio perform on both of these devices. We give you a direct side by side performance evaluation and show you how the same content looks on the Kindle and the iPad Mini.