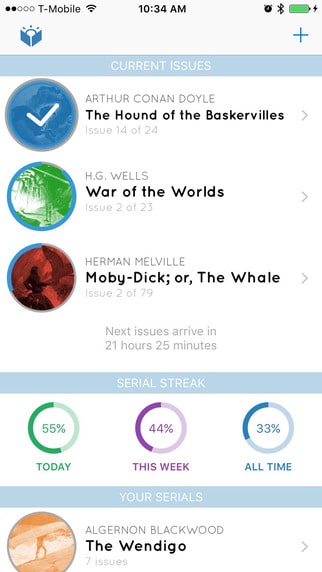 Serialized fiction first gained prominence in Victorian England and first appeared in newspapers. It was practiced by such literary giants as Charles Dickens, Leo Tolstoy and Joseph Conrad.  It fell out of favor in the last fifty years, but is now making a rebound thanks to the iPhone.

Apple is showcasing two new e-reading apps under their new and notable category on the main App Store homepage. PigeonHole and Serial Reader both deliver classic novels into bite sized snippets that are easy to digest and appeals to readers who only have a few minutes to read each day.

Not only are indie app developers getting involved in serializing classic novels, but major publishers such as Simon & Schuster are also getting involved. A few months ago they developed a new iPhone app called Crave, that lets you subscribe to your favorite author and receive bite sized updates of new novels every 24 hours.

Crave makes reading e-books more enjoyable for people who are too busy to breeze through a full length novel. Since only bite sized chunks are delivered on a daily basis, it is a great way to kill some time when you are waiting for transit to arrive, on your break or have a few minutes to spare during the day.

Not only does this app encourage women to read, but to also discover new authors. Every week a new author is added to the platform and this month there are e-books contributed by Colleen Hoover, Abbi Glines and K.A. Tucker.

Rooster is a new company that launched last year and charges users a monthly subscription to access serialized content, instead of charging a fee for each title. The co-founder and editorial director Yael Goldstein Love spoke to Good e-Reader today about the appeal of serialized subscription reading. While much of the content is currently in the public domain or sourced from the company’s other site, Daily Lit, a different model is underway in which classics are paired with contemporary content.

“We’ve been working directly with authors to try to create content that is specifically tailored for the Rooster experience.”

The shorter length of Rooster content is perfect for smartphone reading during snippets of time, something that speaks to the company’s model. Rather than luring consumers with a model that affords them the ability to read mountains of content for one price, Rooster’s clientele is expected to read serialized and novella-length works for far less than the cost of a typical e-book subscription plan.

I think serialized fiction is one of the those segments in publishing that is enjoying a resurgence, thanks to technology. Some companies are simply cutting up classic, royalty free novels into bite sized chunks, while others are taking modern novels, and just delivering a little bit at a time. I don’t think there is a definitive business model yet that will net someone a million dollars, but I like the fact more people are experimenting.