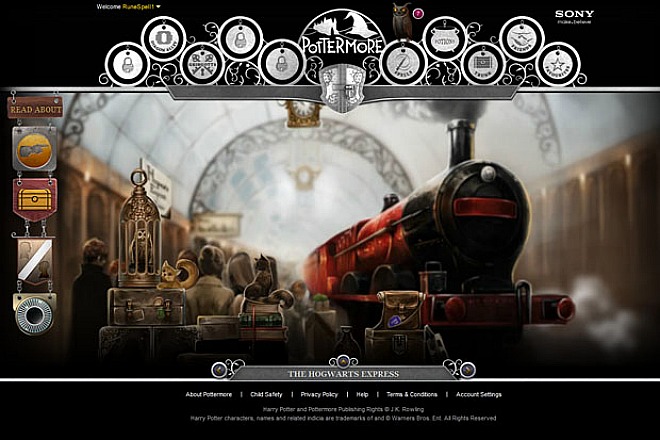 The Pottermore website has done something in the digital publishing industry that no one has managed to do. Amazon, Barnes and Noble, Kobo, Sony, and other major websites direct customers from their websites directly to Pottermore to purchase the Harry Potter line of ebooks.  The best part is the books you purchase are DRM-Free! This basically means you can freely transfer them to your other devices without having to rely on using Adobe Digital Editions. Can other publishers adopt this model and is it economically feasible to make serious money in today’s digital world?

J.K. Rowling and the Harry Potter franchise topples billions of dollars in revenue from the books, movies, and licensing agreements. They have an amusement park and cups at 7-11, proving that it has permeated into most facets of our lives.  Rowling was famous for being anti-ebook for the longest time and remained a staunch holdout in digitizing her content in the current Wild West of ebook distribution. For the longest time Amazon was throwing around huge amounts of money to gain the digital rights and were summarily shut down.

Instead of selling the ebook rights to a major company and letting them solely distribute it for a number of months before other companies entered the fray, she decided to do it herself. Pottermore was initially launched as a virtual world where people can play supplementary characters and run parallel adventures beside Harry Potter. A few months ago they launched their ebook section that sells the entire series of books and gives you a deal if you buy the complete set. Pottermore has made close to five million dollars in sales in its first month and shows no sign of slowing down. One of the best advantages of buying content from this website is that the books themselves are not digitally encrypted. This is a stark contrast to how most other booksellers operate and is a departure from the norm. Amazon, Barnes and Noble, Kobo, and Sony sell all of their books in proprietary encryption formats. This prevents people from distributing the book to others on the internet or reselling the product. To counter theft, Pottermore does a digital watermark symbol on the books that have some of your private info. This means if you upload it to a file-sharing website, all roads lead to you. For the first time ever, a major franchise decided to distribute ebooks on their own and bypass the entire online bookseller scene. The funny thing is, its working and many companies are taking notice.

Earlier in the month, Macmillan removed DRM altogether from its TOR imprint of books, which was a huge positive step forward in making ebooks easily transferable to your myriad of devices. This is setting the stage for other companies to experiment with this business model and see if it’s viable. Obviously, there are piracy concerns and companies have relied on DRM for too long to just scrap it. Consumers can be complacent and resistant to change, which is why the encryption technology has not really been protested.

Can publishing companies adopt the Pottermore model of distributing their ebooks and make big booksellers direct customers to a third party website? I think the Pottermore phenomenon really caught lots of people off guard and is the exception and not the rule. A mega-franchise like Harry Potter comes along once in a generation and there was a predatory desire by the public at large to have these books in digital format. Rowling resisted so long at making the ebooks a reality that the demand for them was feverish. Before her books came out, you only had to look at popular file sharing sites to see millions of people were actively offering all of her books.  Can any established franchises possibly have the clout to adopt the Pottermore model and can they make money from it?

Major publishers have hundreds of millions of dollars in revenue to protect and are accountable to authors, agents, and the rail sphere. Pottermore, when it launched, had no accountability to anyone and hardly any overhead with the website in comparison to the infrastructure of major publishers. It would only take one of the big six publishers selling the ebooks through their own website to change the landscape of the industry.

Microsoft recently invested $300 million into Barnes and Noble and their online ebook collection. Redmond is betting on Windows 8 on tablets and PC’s to give customers the ability to buy tons of books through its own ecosystem. The essence of this deal was to give B&N access to international markets that have eluded the company thus far. Kobo is in the midst of a campaign of world domination with its new relationship with Rakuten. Kobo is leading the charge with expanding into tons of different markets and developing localized versions of their bookstore to accommodate people who speak different languages. There is a huge amount of growing investment into content distribution systems that these companies make the bulk of their revenue from. Amazon and all the rest could not afford to lose a big six publishing partner if the publisher delivered an ultimatum to redirect customers to its own website at the threat of pulling books from their stores. No major online company could afford to lose a big client and thousands of popular bestsellers, while the competition agrees to the publisher’s terms.

The current ebook scene is really in its infancy and will undergo a paradigm shift during the next five years. The current business model of books being locked into encryption and making their customers jump through a ton of hoops will be at an end. The average person has a computer, tablet, and smartphone and wants to easily transfer books to their devices without relying on third party programs. The elimination of DRM will continue to gain traction in the next few years with most major companies adopting alternative forms. Encrypting digital watermarks and behind-the-scenes metadata is the obvious solution to make people accountable for their online actions. Without being obtrusive, it allows people more freedom but penalizes the people who just love to pirate books.

In all honesty, I don’t think any major publishers will decide to sell books through their own website and make online booksellers redirect their customers to it. It requires too much infrastructure and a new forward way of thinking that does not have a proven track record. No “big six” publisher will be the first to pave the way and take all the risks. It would allow their competition to learn from it or overtake them in market share. The best thing we can expect is experiments with smaller imprints to test the waters and move very slowly.