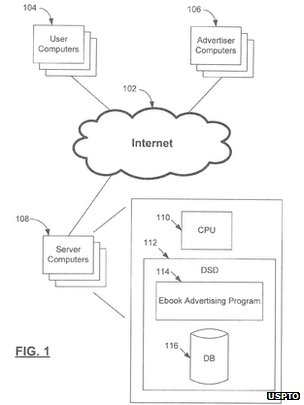 Yahoo has filed an application for two different patents aimed at serving customers advertisements within eBooks. It was filed at the offices for Trademarks and Patents last week in the USA. This new technology could drastically alter the landscape of the eBook experience and finally give Yahoo some cutting edge tools.

There are some very interesting elements to be gleaned from Yahoos application. The essence of the project is quantified in a few specific examples the company gives on how their technology will be employed. “Greater levels of advertising, which may be more valuable to an advertiser and potentially more distracting to an e-book reader, may warrant higher discounts,” it states. One example illustrates a scene showing a waiter giving the protagonists hot drinks “It may be an excellent opportunity to show an advertisement for hot cocoa, or a branded chocolate bar”. Another example states: “If the setting includes young characters, a Coke advertisement could be provided, inviting the reader to enjoy a glass of Coke with his book, and providing a graphic of a cool glass.” Finally different adverts displayed can take into account previous titles the person has purchased and offer titles based on the genre.

Books for the most part have been advertisement free zones but e-readers are no strangers to adverts being served to customers. Amazon and Kobo both display them on the screen-savers and homescreens on their subsidized hardware. You can save normally around 30$ if you want an e-reader that gives you advertisements but they do offer the ability to turn it off for a small nominal fee.

I have extensively debated the merits before about advertisements being served in books and I think it is a great idea. The main reason is books can be subsidized or given away for free if adds are being displayed. I don’t know many people who would pay full price if they had the option to go with Company A that sold a book with adverts and Company B that sold it without.

One of the main benefits of advertising in books is the ability for companies to help curb piracy. One person may buy the book and then thousands of others would be able to share it on File Sharing websites. At least the publishers or self-published author would be able to make commission on the advertisements even if they lose money on the book sales.