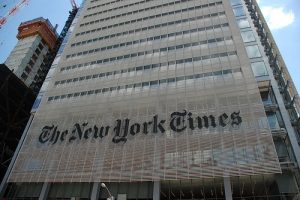 According to a blog post from Indie Reader, great news has struck the self-publishing community: the New York Times has reviewed a self-published title in its prestigious book review section. While the Times has been reviewing and ranking ebooks for a short time, this marks the first time an author–albeit an author with a strong platform due to his well-known body of work as an entertainment critic, as opposed to an unknown debut author–has crossed over into its mainstream book reviews with a two-page review.

The Revolution Was Televised by Alan Sepinwall, television critic for HitFix with his own widely popular blog-column, “What’s Alan Watching?” details how different television programs have changed the crime drama genre forever.

The interesting aspect of the Times‘ review is that it isn’t mentioned until late in the piece that Sepinwall’s book is self-published, a fact that once would have been noted in the headline. What does this mean for a greater acceptance and a “we’ve finally brought down the barriers to publishing” mentality behind self-publishing? According to Amy Edelman, president of Indie Reader and the writer of a blog post about the Times‘ review, it won’t mean much for now.

“Does this mean that The Times will start reviewing other indie titles?  Doubtful.  In her piece in Forbes announcing the news, Suw Charman-Anderson states that ‘Most reviewers don’t want to deal with self-published authors directly because they don’t really want to deal with any authors directly…’ (emphasis Edelman’s)…and that ‘reviewers depend on publishers acting as winnowers, sorting out the wheat from the chaff, and at least attempting to make sure that they are sent books they are actually interested in.’  All true.”

What might actually signify the end of the stigma is if a prestigious and iconic outlet reviews a book and fails to mention whether it is self-published or traditionally done. That is when the attitudes about self-publishing will have truly died away, and a book can simply be appreciated on its merits instead of its route to publication.