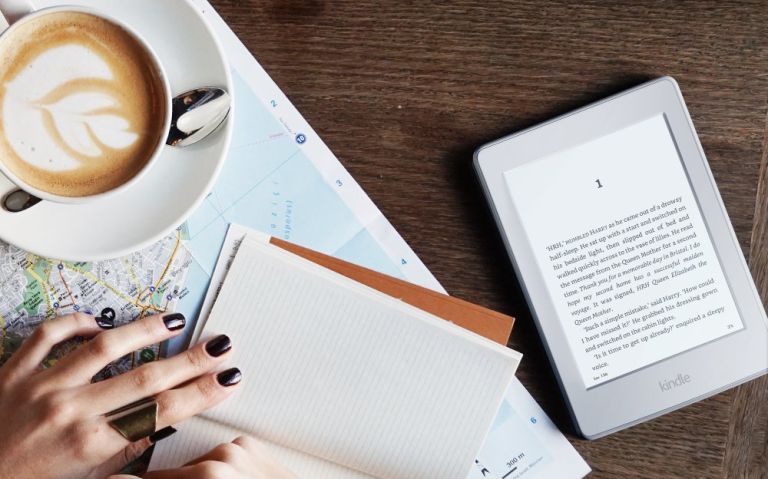 E-Readers are undergoing a resurgence in popularity and more new devices were released in 2019, than any other year. There were two different types of hardware, consumer grade e-readers such as the Kindle, Kobo, Nook and E-Notes such as the Onyx Boox MAX 3 and Likebook Ares.

Amazon released four new e-readers in 2019 – the Kindle Paperwhite 4, which now is waterproof, the Kindle Oasis 3 with warm light system, Kindle Basic with a new higher resolution panel and the Kindle Kids Edition with a multiyear warranty.

Barnes and Noble released the Nook Glowlight 7.8 this year and it was the first large screen e-reader. It was a large success for the bookseller, no pun intended.

Kobo released the Libra H2O as their sole device of 2019 and it maintained the same asymmetrical design as the Kobo Forma. The big selling points is that it has manual page turn buttons, a new e-reading system and it has a very low price point.

Pocketbook had a very good year, their e-readers from last year were selling like hotcakes. In 2019 they released the InkPad X, which was the first 10.3 inch e-reader. They also issued the Touch Lux 4 Limited Edition, which featured an all rose gold color design. The Pocketbook InkPad Pro was also their flagship e-reader that does it all. It is waterproof and has Bluetooth, in addition to having a larger screen than the Kindle Oasis.

SuperNote is a new company that has been taking the world by storm. Their line of digital note taking devices are very unique and run Linux. The 10.3 inch SuperNote A5 is their flagship device and is a real pleasure to draw on. The 7.8 SuperNote A6 is also a very good device. Both of these can read EPUB ebooks and export notes to PDF/PNG. They have a line of digital stationery, such as the Heart of Metal series, which are a line of stylus made of high grade aluminum and come in 12 different colors and also premium cases. They worked out an agreement with BIC and will soon be releasing a two-in-one stylus and pen.

Onyx Boox released a large number of devices in 2019. The big selling points of the Nova PRO is that it will be a digital note taking device. It will have a WACOM screen and come with a stylus. There will be a digital note taking app and functionality to edit PDF files. This in in addition to the capacitive touchscreen display for swipes and gestures.  The Onyx Boox Note 2 is the second generation E-Note and expands upon the original in a few meaningful ways. It is running Android 9 out of the box, which means there is an extra layer of security, but it is compatible with a number of modern apps. They also issued the Note Pro which features a 10.3 inch E-ink Mobius and Carta display and a resolution of 1872×1404 and 227 DPI and Android. The Onyx Boox MAX 3 is a 13.3 inch e-reader that specializes in making notes and annotations, in addition to reading and editing A4 PDF documents. This device is absolulate beast in the specs department, 4GB of RAM, 64GB of internal storage and powered by an Qualcomm Snapdragon 625 octa-core processor. If you are looking for a lightweight, replacement for paper, this product deserves a serious look.

Boyue released a few other digital note taking devices in 2019. The first was the Likebook Mimas, the big selling points is that it has a front-lit display and glowlight, making it the first 10.3 inch e-reader that you can use in the dark. This immediately makes it a viable alternative to the Sony Digital Paper DPT-CP1 and the Onyx Boox Note. The Boyue Likebook Muses has many things in common with the Likebook Mars, that was released last year. The big selling point is that this device has a WACOM active digitizer layer and comes with a stylus, so you can take notes, highlights and make annotations in ebooks. This e-reader is way better than the Mars because you can do so much more with it. The Boyue Likebook Alita can be considered a second generation Likebook Mimas, which is the most successful e-reader that Boyue has ever released. The main selling points is that it has a flush screen and bezel design, which should make it easier to make notes and edit PDF files. It also has double the RAM, which should make multitasking and running Android apps, much more robust. The Boyue Likebook Ares is the last e-reader and digital note taking device that the company has released this year. The major selling points is that it has an octa core processor and an SD card, capable of an additional 128GB! Many brands have gotten rid of all SD card support, so it is refreshing to have a model with it. This device is a smaller version of the Likebook Alita, and retails for $294 from Good e-Reader and comes with a free case and screen protector.

There was also a bunch of other e-readers that were released, but most of them did not sell very well. This includes the Mobiscribe, Dasung Not an E-Reader, iReader Ocean, 2 new Bookeens, the Mooink Pro and a number of others.

I believe that 2020 will be a banner year. SuperNote intends on releasing a few new devices and there will also be a Remarkable 2, a new Sony Digital Paper and of course Amazon, Kobo, B&N, Onyx and Boyue will also release a slew of new devices.